The world is now experiencing inflation like they haven’t seen since 1971. These high costs are making very difficult to make ends meet. Inflation here in the US is worse than expected. The [DS]/Ds are trying to blame everyone else but the people see through this. Trump sends message and is using the economy against them. The [DS] have lost the narrative, Durham is closing in on the [HRC] team and they are losing the narrative, Durham is squeezing them. The fake news C_A ops is about to all fall down. They will try a communications blackout or a power grid blackout. Pain is coming and the [DS] knows it. The election crime on they did it is now public, and the people are demands something be done, which state will be the first to decertify?

Worse Than Expected: Consumer Prices Up 8.3% in April

It has nothing to do with they party that controls the White House, the House of Reps and basically the Senate…Right? https://t.co/WhXYK0pHh9

Biden’s disastrous policies are hurting families. We were energy independent prior to Biden taking office. pic.twitter.com/ZdifuFfR3v

US Consumer Debt Accelerates Towards $16 Trillion 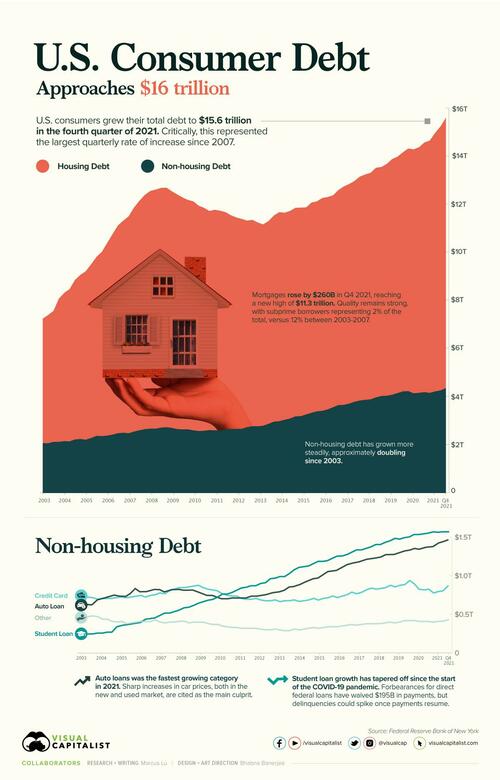 The Economy Will Decide the Midterms, Not Abortion

New @trafalgar_group/@COSProject poll (5/6-8) indicates 3/4s of #Americans do not support publishing the addresses #SupremeCourt Justices or protesting at their homes in response to the upcoming #RoeVWade decision.

Elias’s tactics are now drawing rebukes from judges, prosecutors, and even fellow Democrats, who say his hard-charging nature is hurting the party. Elias is publicly reeling. He last month scrubbed years of posts from his Twitter feed and hasn’t explained why. The move comes less than a year after he decamped from the white-shoe law firm Perkins Coie to found his own law firm—ostensibly to engage “more fully” in the “political process,” though some speculate the firm was increasingly uncomfortable with Elias’s tactics and the scrutiny of the Durham probe. Durham indicted Elias’s partner, Michael Sussman, a month after Elias left.

https://www.foxnews.com/politics/durham-moving-full-throttle-on-russia-probe-review-with-top-federal-prosecutors-involved-sources
Keywords are fun for the whole family.
“They FARMED the investigation out because it is too much for Durham and he didn’t want to be distracted,” one of the sources told Fox News.
“He’s going full throttle, and they’re looking at everything,” the source told Fox News.
Breadcrumbs were being dropped in the days preceding the decision that his case could be reconsidered.
Q

Sealed indictments.
Define indictment.
“An indictment is a formal accusation against one or more defendants, charging them with one or more crimes. In the federal criminal system, the indictment is the principal method by which a prosecutor initiates criminal proceedings.”
How are they sealed?
How are they secured?
How are they safeguarded?
No leaks [unusual?]
Federal vs ….
Why are accusations sealed?
Grand jury involved?
Re_read crumbs re: DOJ / FBI re: IG / Huber
Who appointed Huber?
SESSIONS.
WHAT DEPTS MUST BE CLEANED PRIOR TO REC FAIR AND EQUAL [JUSTICE] UNDER THE LAW?
What happens if FED [criminal] indictments are brought forth to a corrupt FBI / DOJ / FED Judge?
FBI / DOJ – 1st.
C_A / State – next?
Now comes the pain.
Q

The point to understand.
They [knowingly] unmasked [attached names to] AFTER POTUS won the election of 2016.
They thought they could prevent the exposure of this information and remain protected.
Why did they believe this?
What ‘insurance’ did they have?
Infiltration of US GOV?
This fact alone should scare every American.
SHADOW PRESIDENCY.
SHADOW GOVERNMENT.
It took this long for a reason.
Q

Judicial Watch announced today that a federal court has ordered the FBI to disclose additional details about FBI and other officials “cc-ed” on the memo used to justify launching the “Crossfire Hurricane” spy operation against President Trump and his 2016 presidential campaign.  Judge Carl J. Nichols has given the FBI until June 16, 2022 to respond.  The order comes in a September 2019 FOIA lawsuit Judicial Watch filed after the FBI failed to respond to a request for the memo, known as an “Electronic Communication” or “EC.”  (Judicial Watch v. U.S. Department of Justice (No. 1:19-cv-02743)).

In May 2020, Judicial Watch obtained a redacted version of the previously secret memo, authored by former FBI agent Peter Strzok.  The Biden Justice Department argued that there is no significant public interest in disclosing the names of officials “cc-ed” on the memo.

Judicial Watch filed a motion countering that claim and arguing that the public had a significant interest in knowing who at the FBI had knowledge of the memo and presumably approved the investigation.

The court held a hearing on the dispute in September 2021, and on May 2, 2022 issued a minute order requiring the FBI to file a supplemental memorandum of up to 5 pages, supported by affidavit or declaration, explaining the positions and seniority held by any persons whose names are redacted from the “CC:” section of the document.

“The Biden administration is still covering up who was involved in the Obama administration’s unprecedented and illicit spying on Donald J. Trump,” said Judicial Watch President Tom Fitton. “This court decision is another step forward in accountability for the worst government corruption scandal in American history.”

Counting last night’s rushed vote, Congress has now spent more money on Ukraine in six months than we spend on all US roads and bridges in a year.

… something to think about the next time you are stuck in traffic or replacing a bent rim.

Notice the media doesn’t yell at Biden for not spending the $40 billion war budget on world hunger. Why is that?

Comparatively, in September 2021, just 1.1% of COVID-19 deaths occurred among Americans who had been fully vaccinated and boosted with their first dose. By February 2022, that percentage had increased to about 25%.

MSM.
CIA counter-ops.
Will all fall down.
Q

If America falls, the World falls.
God bless our brave fighting men & women.
They deserve our deepest gratitude.
Through their strength, and the millions of united Patriots around the World, we will succeed in this fight.
Peace through strength.
Now comes the pain.
Q